This article will explain about allocating ad sets.

There are 3 areas that can have an ad set allocated to them, they are a club, team and competition, but first an overview of how allocation works.

In simple terms, ad set allocation gives you complete control over when and where ads are shown during your broadcasts. By setting percentages you can control how many ads are displayed. You can also configure which sponsors’ ads are shown when in-game events and breaks in play occur and allocate ad space within the broadcast to other sports organizations, such as the home or away team.

If you’re used to just placing sponsor’s logos in the corner of the screen for the whole match, then ad allocation might seem complicated. Still, it’s worth getting your head around it as it’s an important part of maximizing your sponsorship revenue and keeping your sponsors happy. Live sports advertising is different with LIGR. Only one ad is shown on the screen at any one time, and the appropriate ad size from the ad set is chosen to fit with the onscreen graphics and the moment within the game. This means that instead of having space for four or five sponsors onscreen, you now have dozens of opportunities to show ads and space for large banner ads as well as small logos. There’s a lot more ad space within a game, and allocation allows you to divide that inventory between sponsors.

Allocation has many benefits:

How to assign an ad set to a club

To understand ad set allocation, you should first understand how clubs and teams work within LIGR.

It is also possible for users to take advantage of the Club Portal option, where users can upload and manage club assets, squad lists, and club sponsors. An article outlining that can be found here.

Ad sets can only be assigned to one club at a time. When you assign an ad set to a club, it makes the ad set available to all teams within that club. No other club or competition can use it until it is unassigned.

There are two stages to ad set allocation at the club level: first, assign the ad set and then set a percentage.

1. Assigning an ad set to a club

A new unassigned ad set can be assigned to a club by following the below steps: 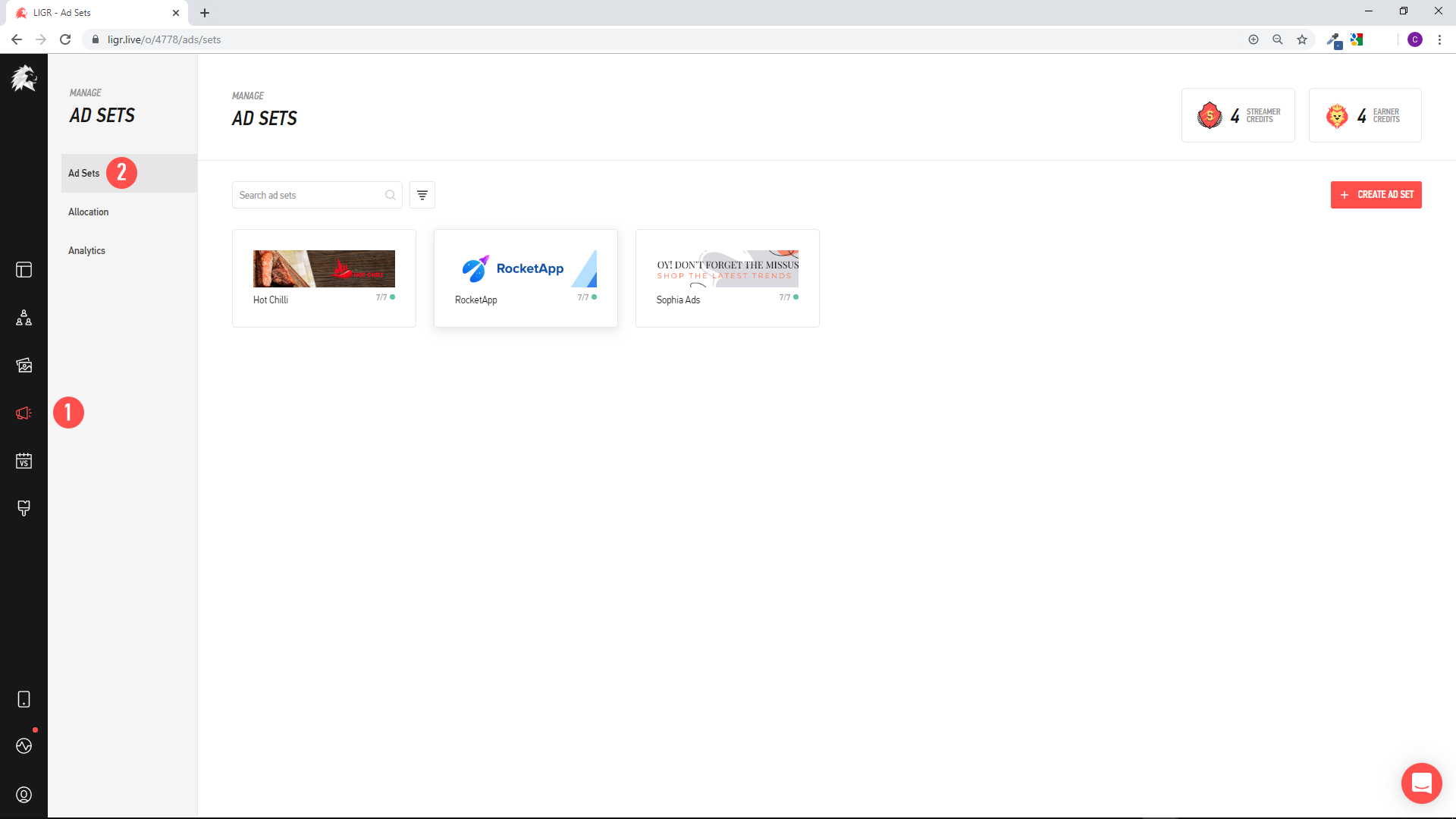 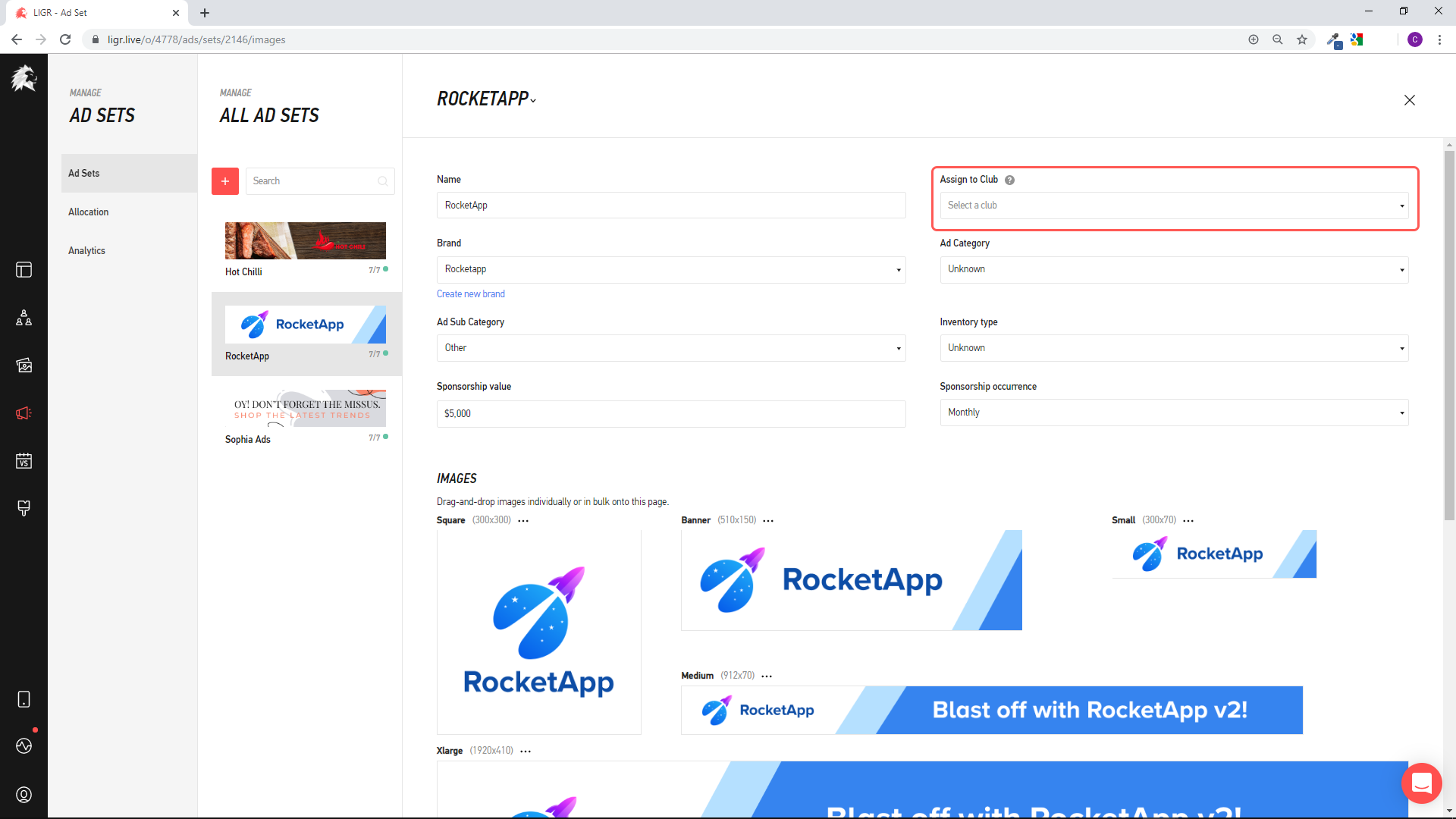 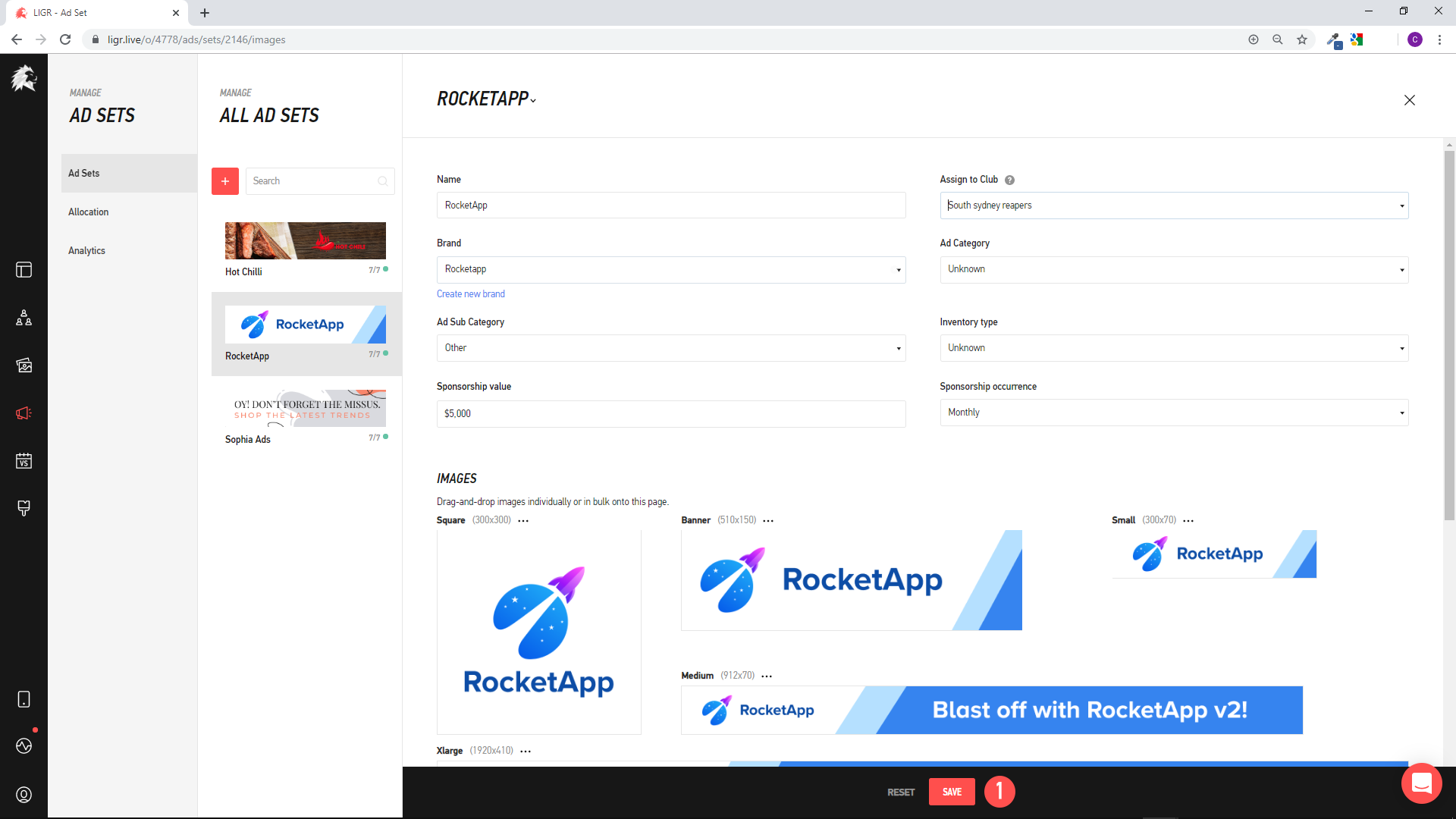 Once the ad set has been allocated to a club, it can then be given an allocation percentage by following the below steps: 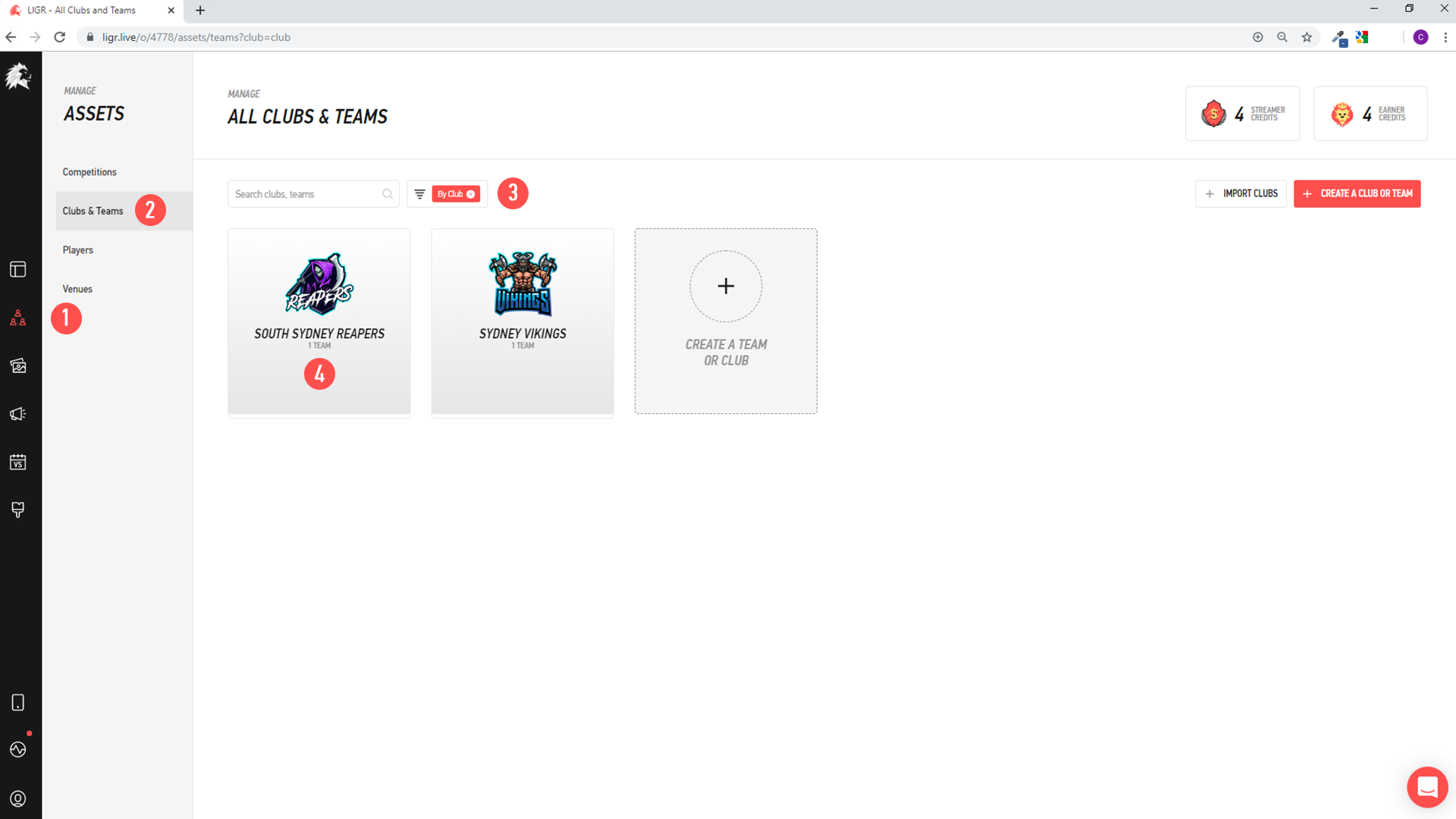 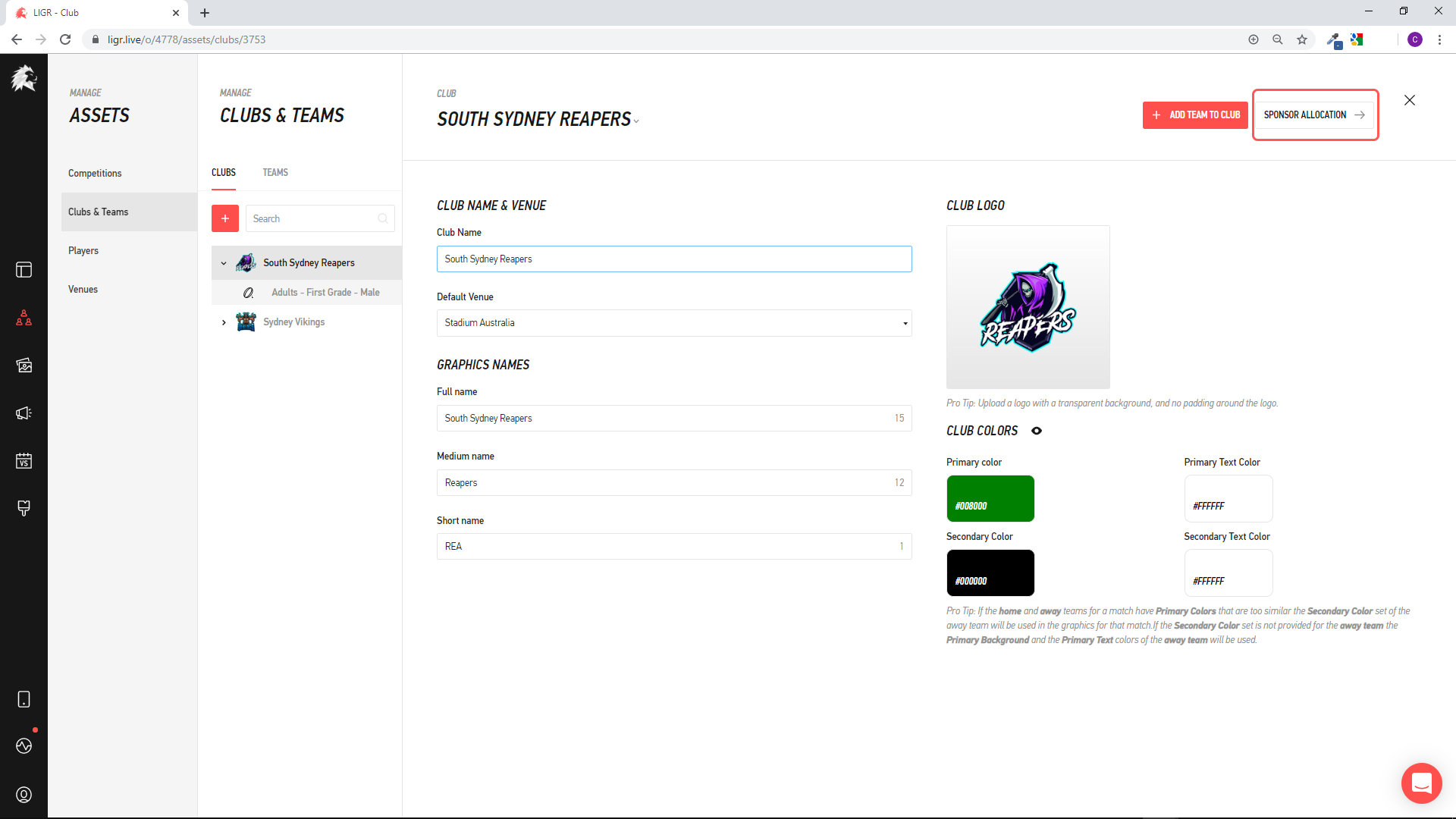 Here you can set the allocation percentage for the ad set you just assigned to the club and any other ad sets if they have previously been assigned: 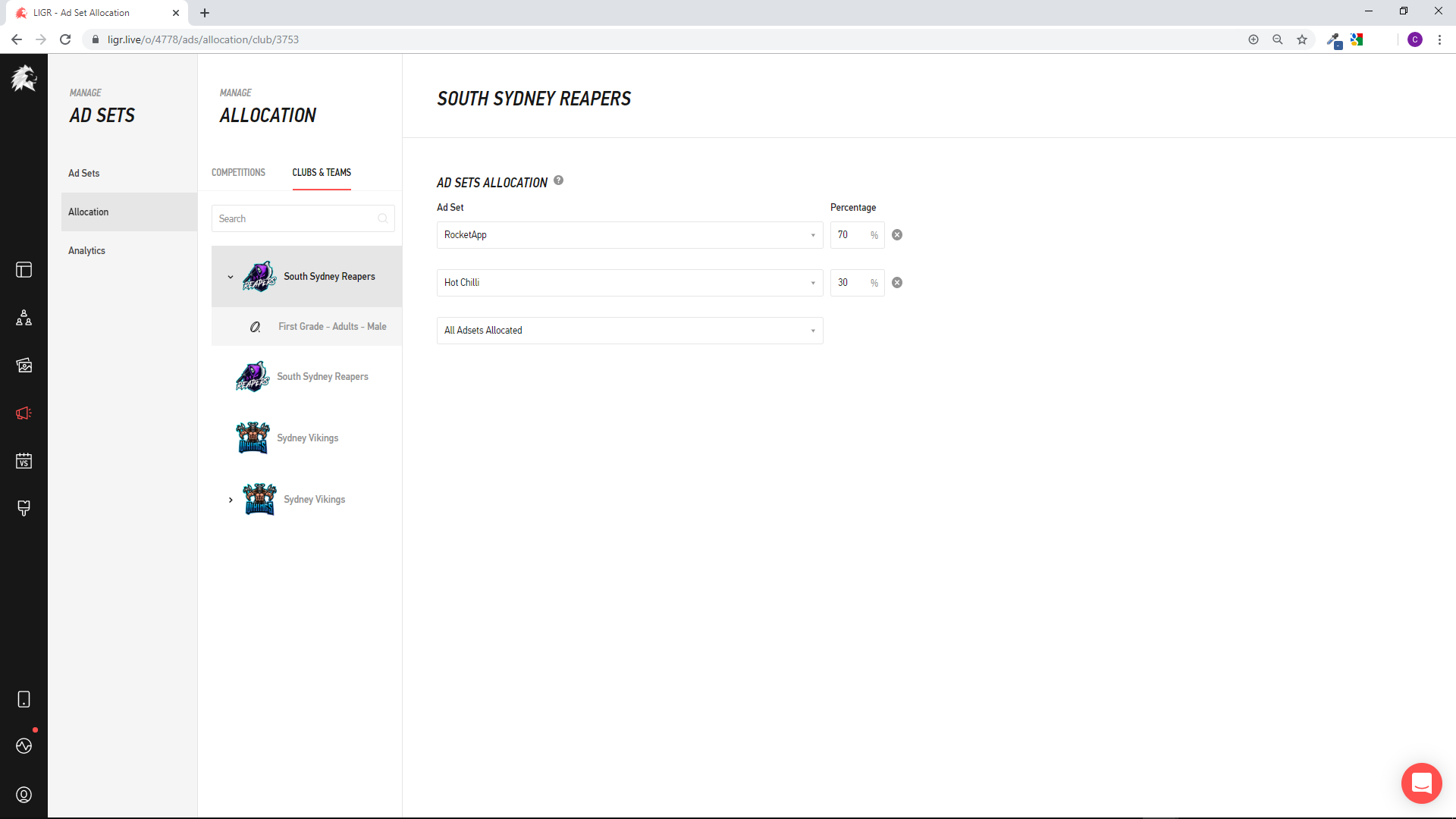 Under club-level settings, the percentages represent a part of the allocation when the club is playing as the home or the away team.

Each match is different, so the number of ad displays in any broadcast will vary depending on the sport, the amount of action in the game, and the graphics settings (as ads are shown alongside live graphics).

By default, all ad allocation percentages set for a club are passed on to teams within the club. To override these settings and control allocation at a team level, see below. 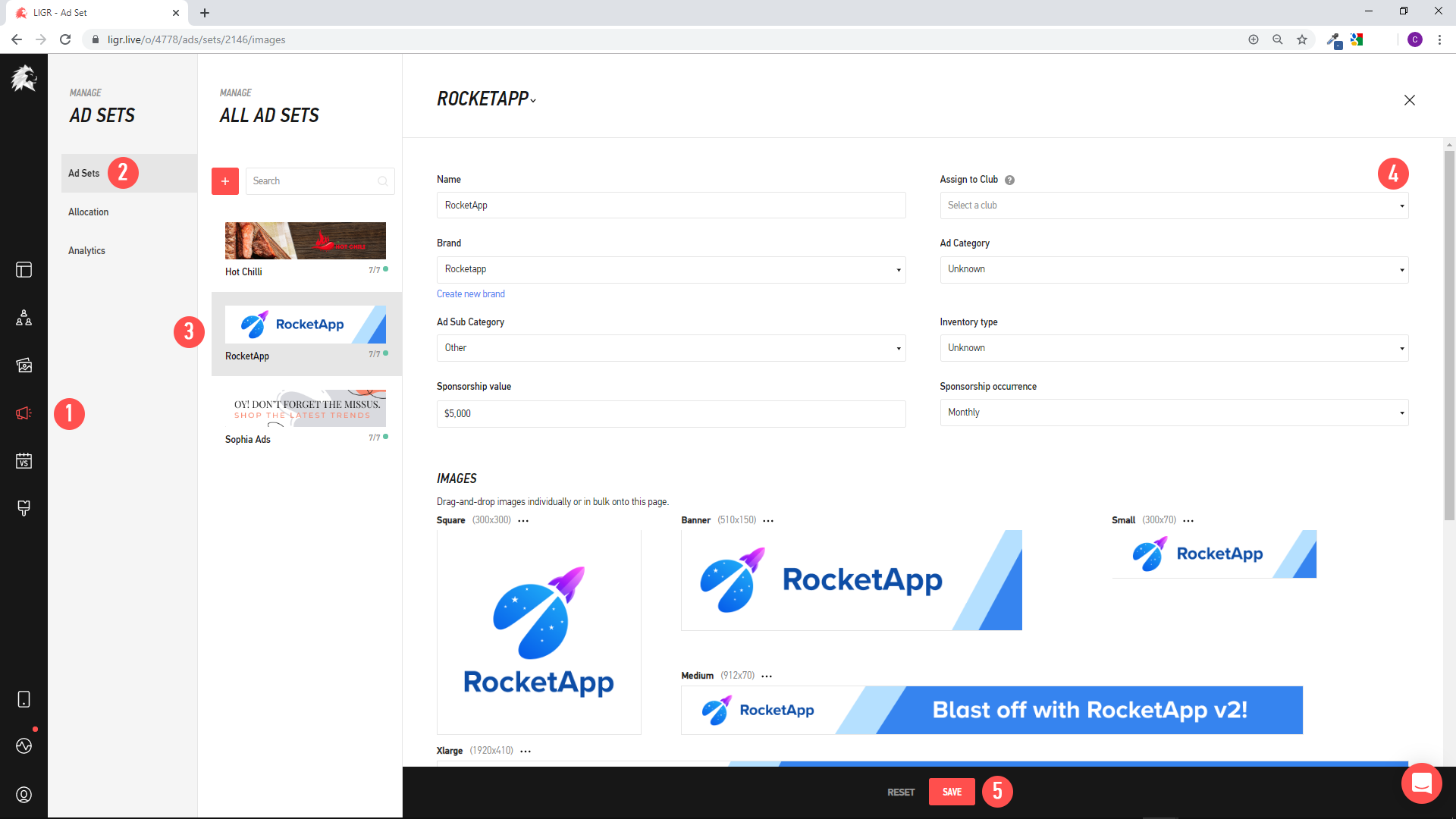 The ad set is now unassigned and can be allocated to any other club or competition.

How to assign an ad set to a team

To assign an ad set to a team, it must be assigned to the parent club first (see above) 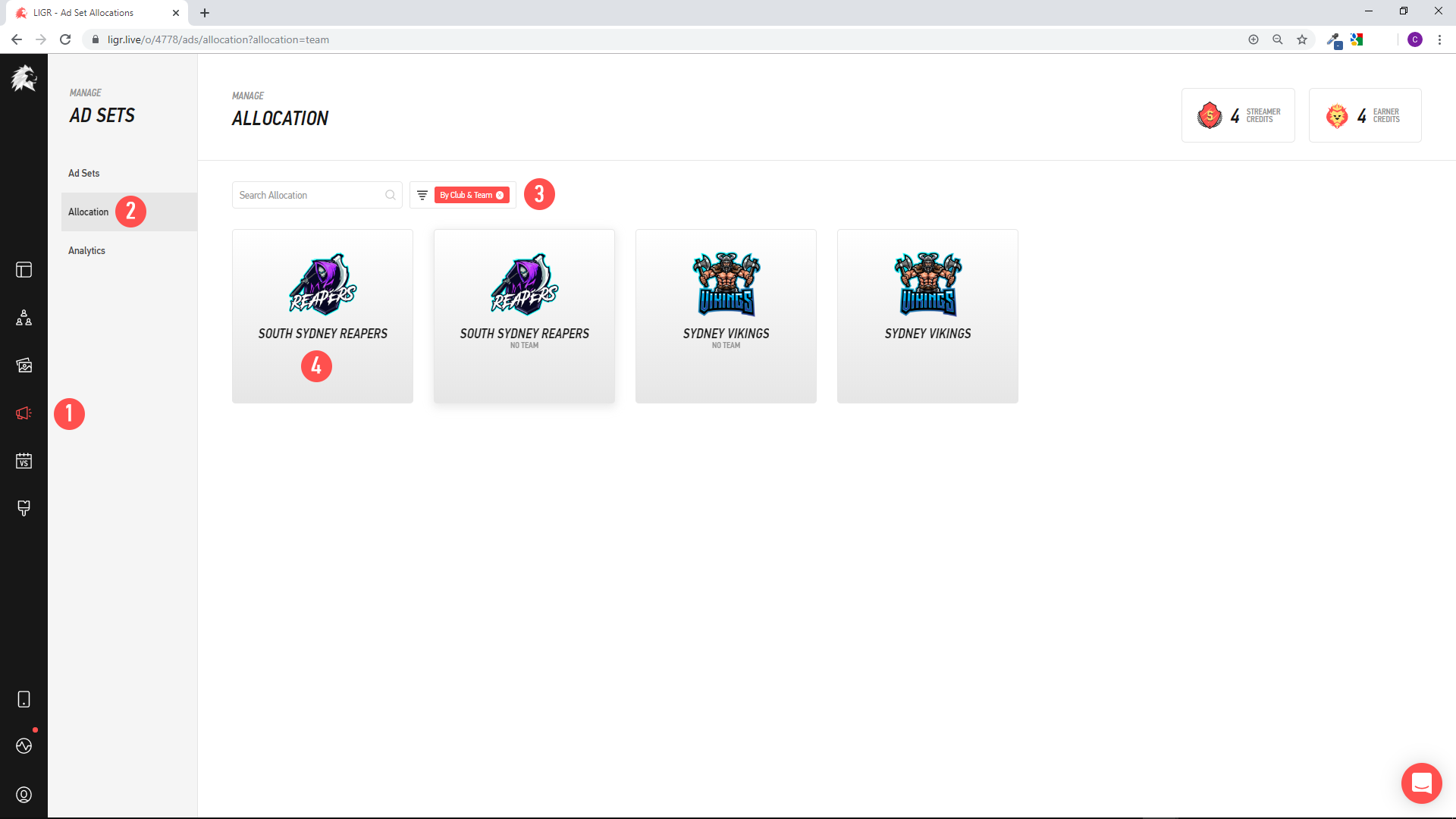 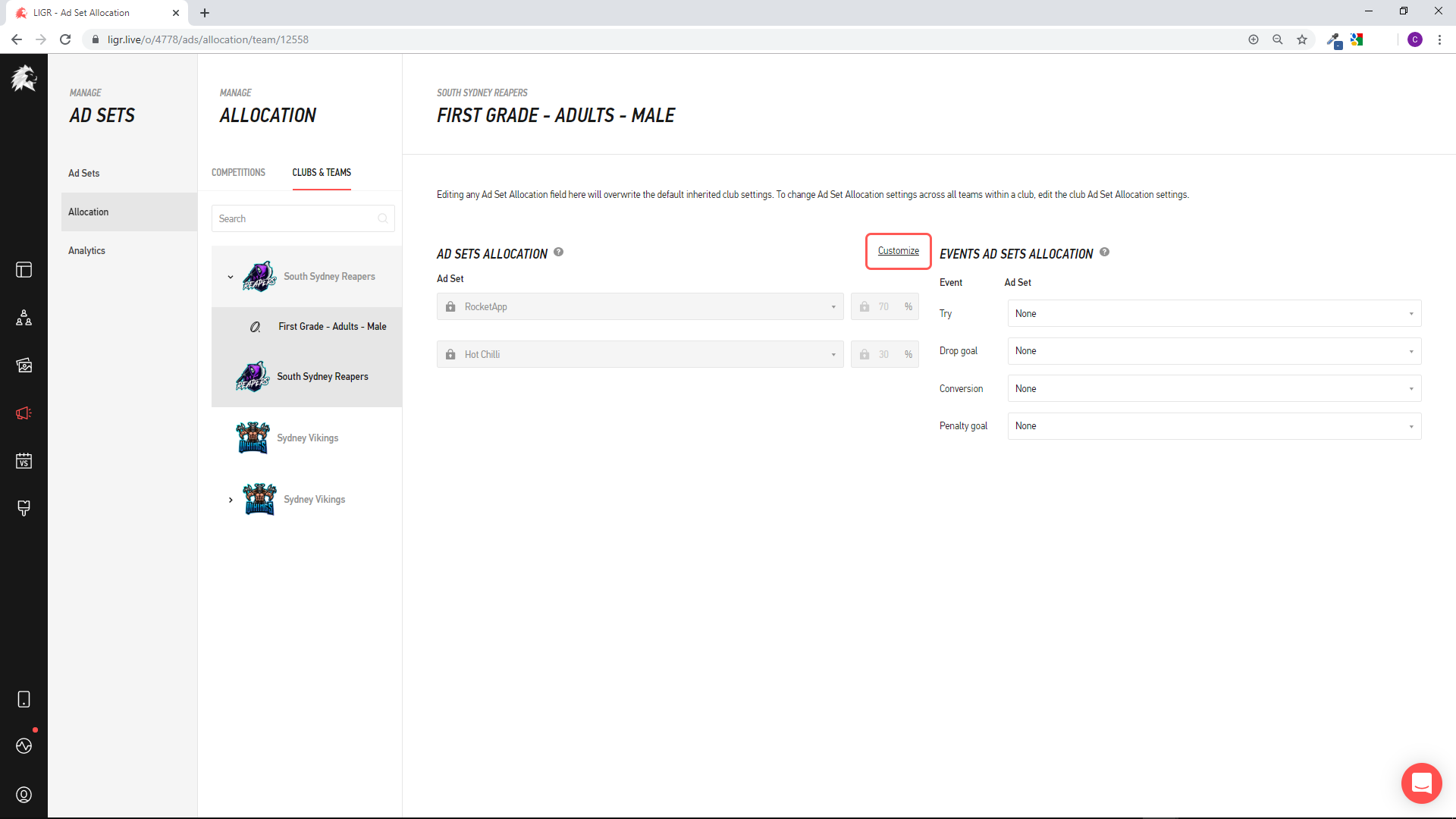 This will unlock the settings and allow you to make team-level adjustments. You can swap out sponsors, add or remove sponsors, and change percentages.

Any changes you make here will apply to this team only. For example, you could have a club with four teams; if you make team-level adjustments to the ad sets, they will apply to that team only. The other three teams will inherit settings from the club.

If you want to return to the default settings (inherited from the club), hit the Reset to club default link.

How to assign an ad set to a competition

As a broadcaster, you might not want to show ads 100% of the time because this could affect the viewing experience. It might be overwhelming for viewers to see ads every few seconds during a game. Also, if you have one or two sponsors, it may become overly repetitive to show the same ads over and over again.

An ad set can be assigned to a competition by following the below steps: 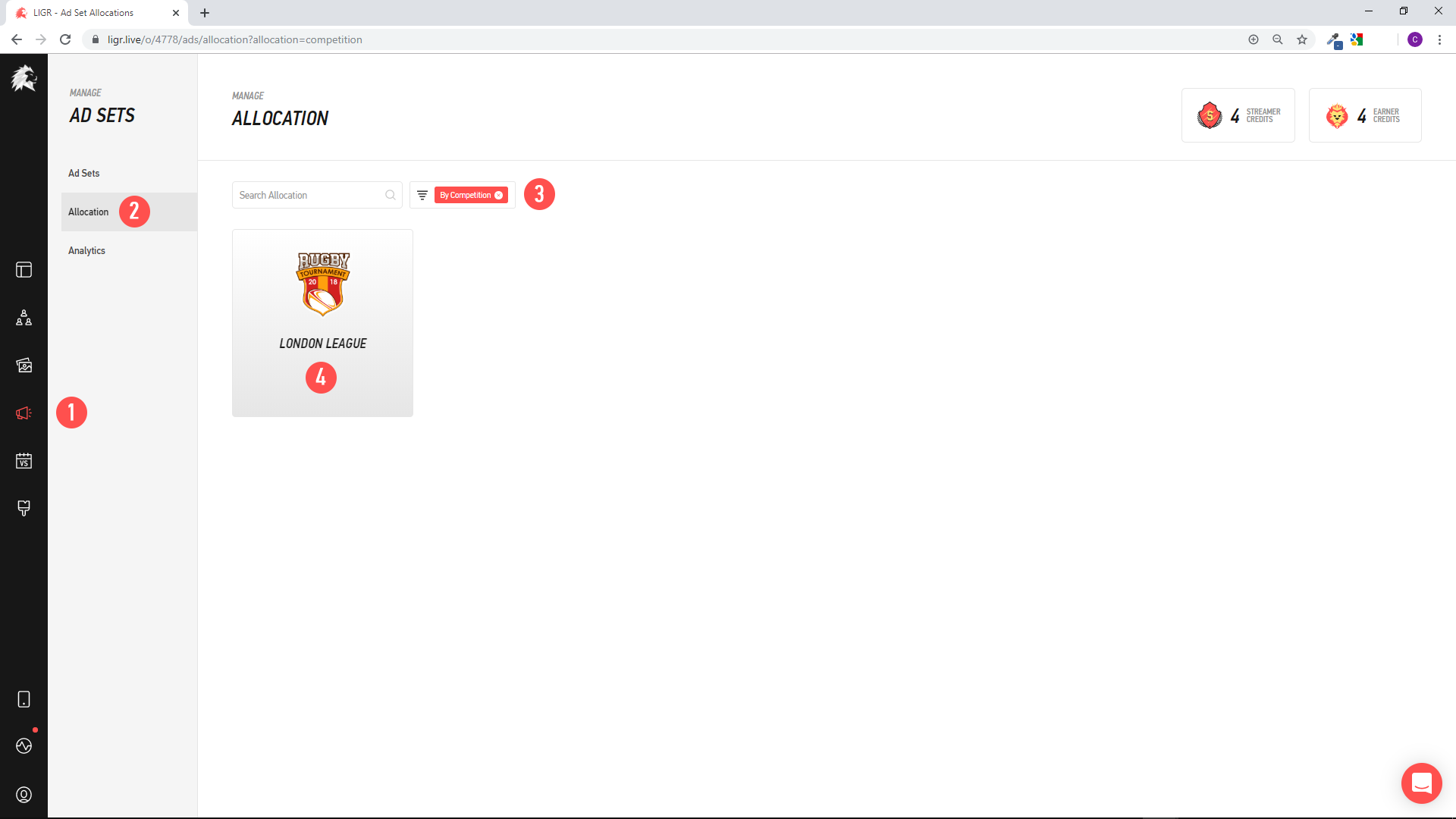 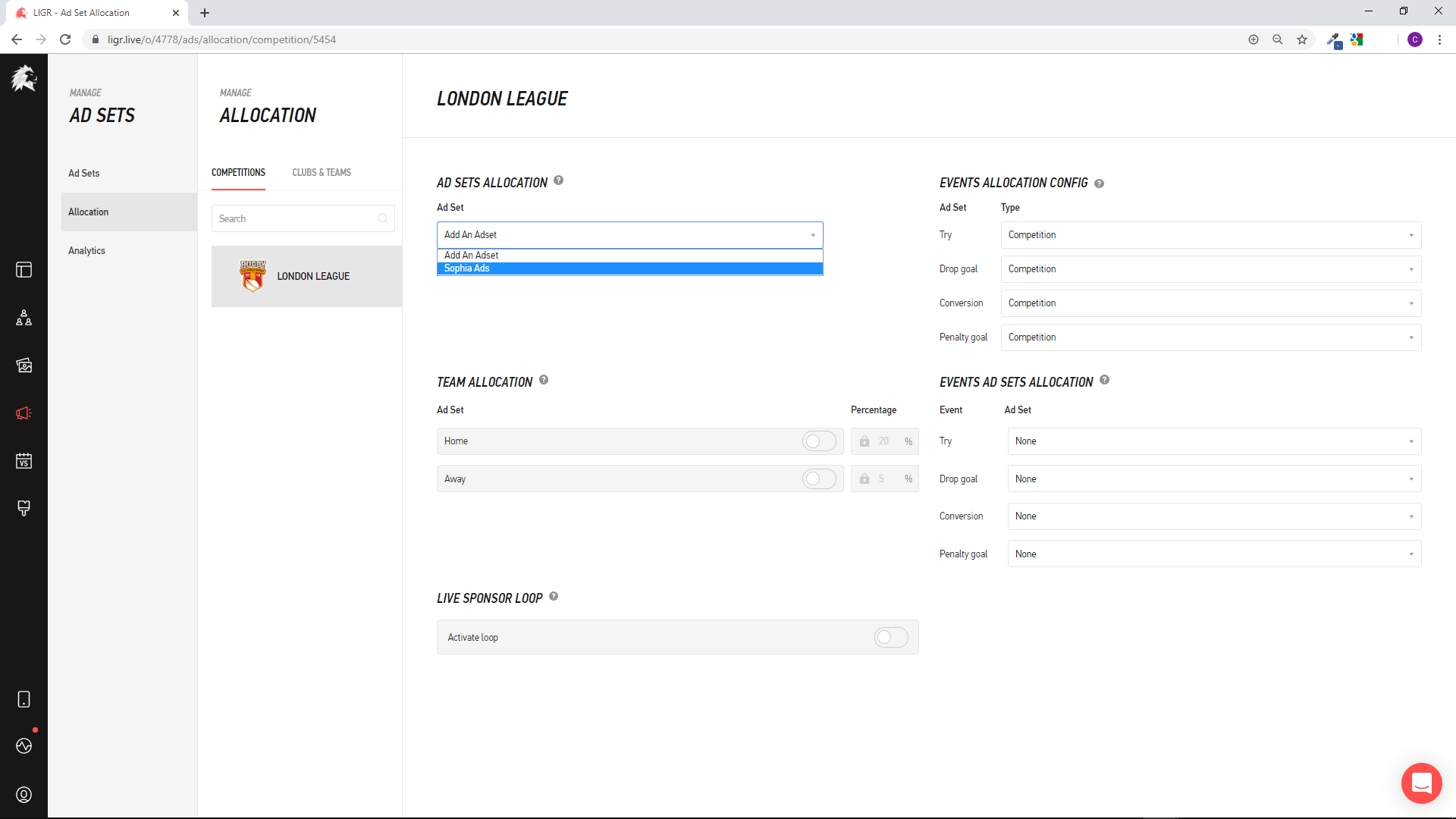 The percentage you set here is a portion of the total number of opportunities to show ads within a broadcast.

You can assign ad sets to in-game events at the competition level and team level (not at the club level).

Within LIGR, events are defined as important in-game moments. For example, in soccer, the events that you can assign ad sets to are goals, yellow cards, and red cards.

Assigning an ad set to an event means that whenever the event occurs in a match, the ad set is shown. This means that broadcasters can sell sponsorship packages for these specific events. For example, an accident insurance company might want to sponsor red cards.

These settings are complicated, so you can skip this section if you aren’t interested in allocating ad sets to events.

An ad set can be assigned to a competition by following the below steps: 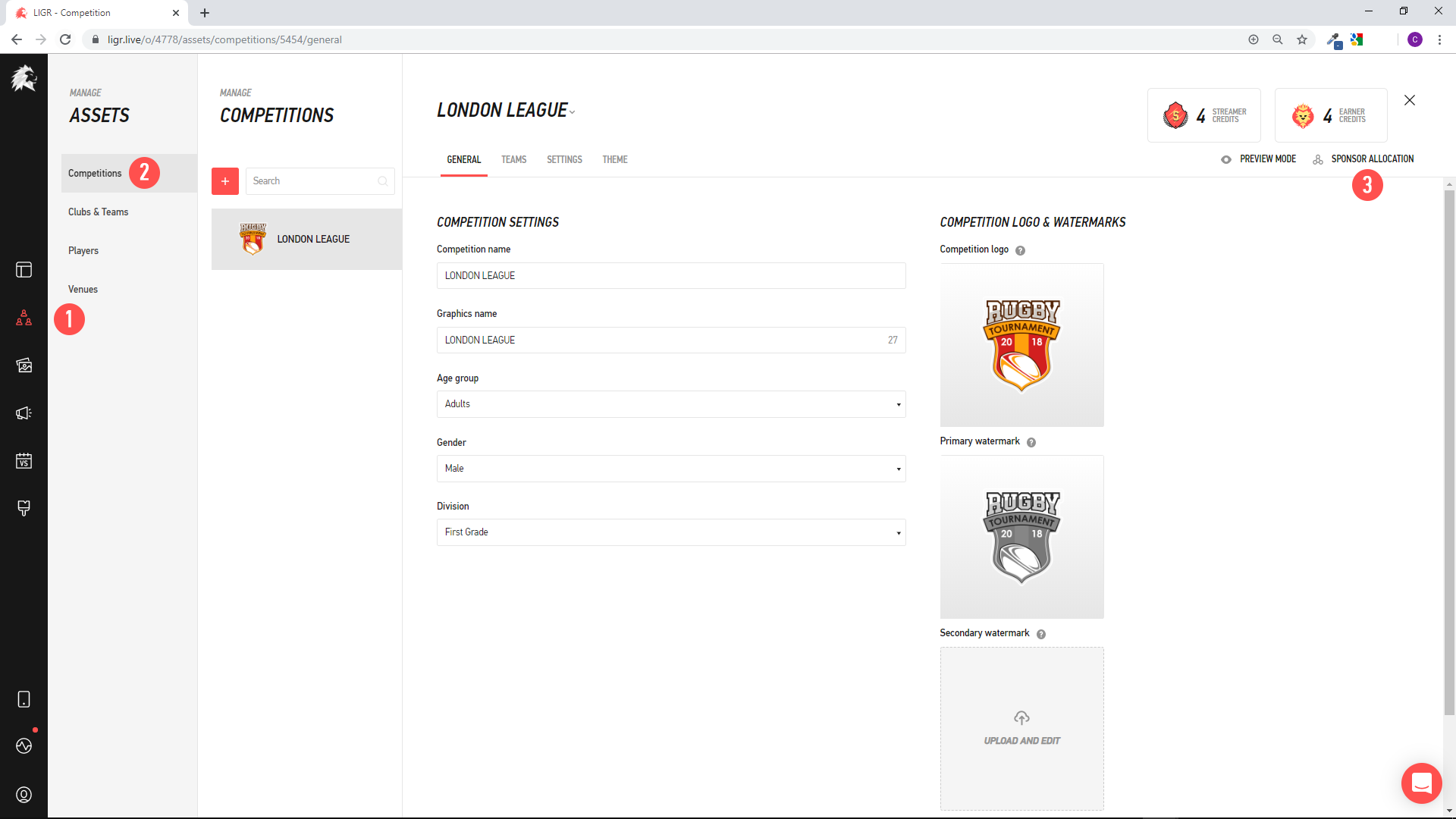 You will see a screen that looks the same as below 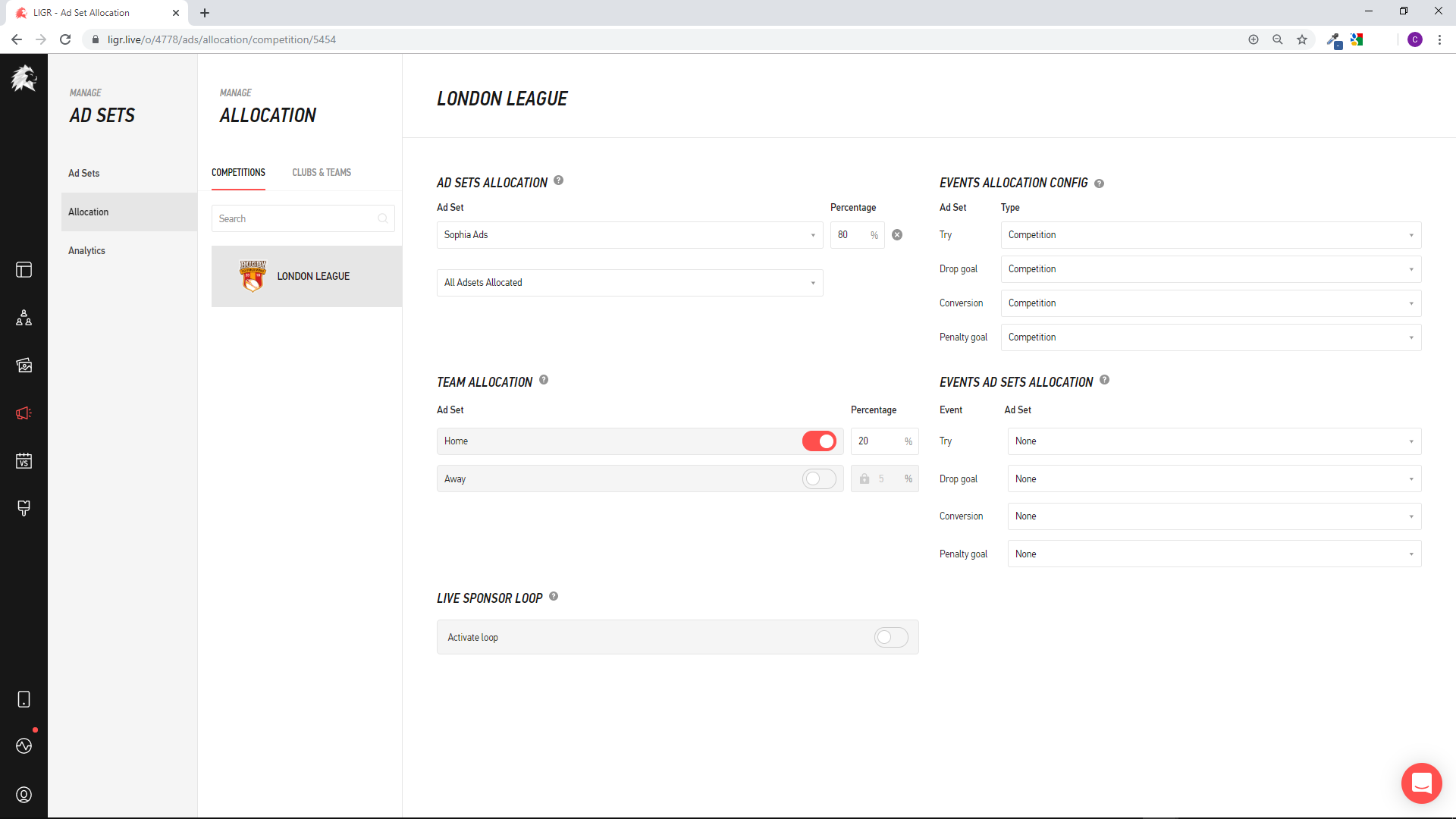 Event Allocation Config allows you to choose from four different settings that determine how ad sets are allocated to events:

Selecting Team, Home Only, or Use Percentage will lock the Events Ad Sets Allocation drop down for that event and use allocations set elsewhere, depending on your selection.

Under Events Allocation Config, select the drop down menu for the first item (in this case, for a try in a rugby league match) and you will see 4 options. 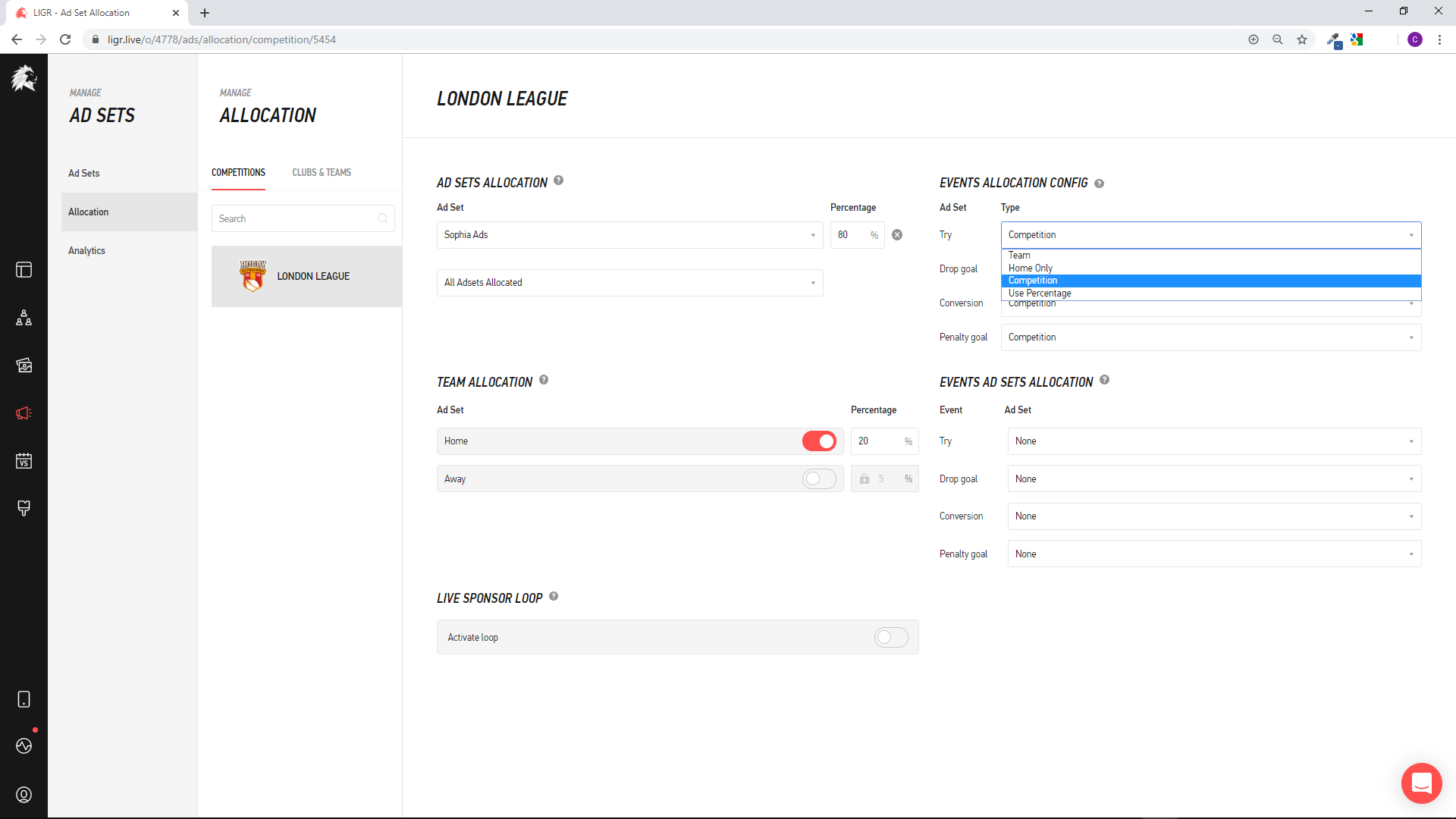 Team: Locks the Events Ad Sets Allocation drop down below and uses the allocation settings for the teams involved in the match. These settings can be found under the ADS tab on the ALLOCATION sub-menu. Each team must be configured individually, so select the team you want to configure, and the Events Ad Sets Allocation settings can be found on the right of the screen. 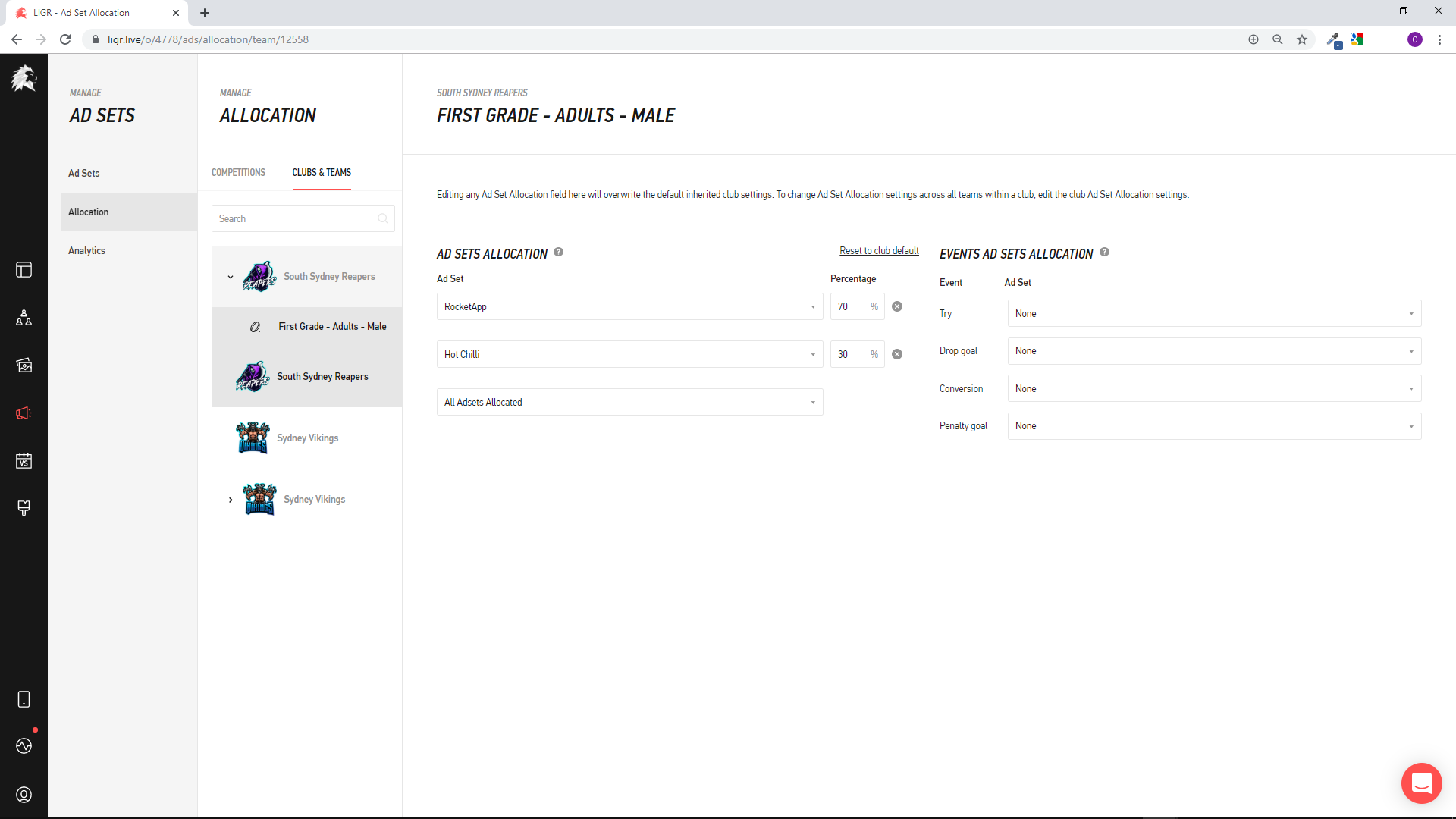 Select the ad set that you want to display when each event occurs for the selected team during a match.

Percentage: Locks the events ad sets allocation drop down and displays ad sets based on the percentages set under the Ad Sets Allocation heading on this screen.

Competition: Populates the Events Ad Sets Allocation drop down with all ad sets assigned to the selected competition for the user to choose from.

NOTE: If Competition is selected and None is selected in the drop down below, it falls back to percentage allocation settings (see Percentage above).

How to use sponsor loop

Are article explaining the Live Sponsor Loop can be found here.