What are webhooks?
In simple terms, webhooks are how web-based apps communicate with each other. A webhook looks like a normal URL, with some data added on the end after a question mark.

Smart tech, such as automatable light bulbs or robot vacuum cleaners, work using webhooks. When you set a routine in a smart home app, for example, to turn on a light at 7pm, when the time comes, the smart home app triggers a webhook that sends a message to your lightbulb to switch it on. The webhook “message” contains all the information it needs, such as brightness and color.

What are webhooks used for?
As well as smart tech, webhooks are used in countless web-based apps that automate tasks, sync information, and talk to each other. For example, a restaurant might want to automatically add online reservations from Foursquare to their Google bookings calendar.

What can I do with webhooks on LIGR?The LIGR platform is designed to make automating live sports production tasks as easy as possible. Let’s say you’re a big sports club with more than 20 games going live on a Saturday afternoon, all broadcast on your website. Setting up these streams manually by copying and pasting the LIGR overlay into your production setup is a laborious job that can be automated using webhooks. Instead of doing the work manually, the whole process can be automated. When you create a match on LIGR and have webhooks set up, the LIGR platform uses a webhook to pass the overlay URL to your system, which can trigger whatever routines you want to set up using the data that’s been passed from your LIGR account.

Along with the overlay URL, the webhook also contains all of the data related to the match, such as the competition, home team, away team, date, time, and more. Then, whenever the live scorer logs anything during a game, such as the start of the match or a player scoring, a webhook is triggered and the information is passed on. You really can do anything you want to with this information; for example, you could use webhooks to connect LIGR to Twitter and automatically tweet whenever your team scores a goal. The main application of webhooks is to automate processes and become more efficient.

Where can I find webhooks on LIGR.Live?
Log in to LGR.Live and select the person icon on the left-hand menu, then select “Webhooks.” 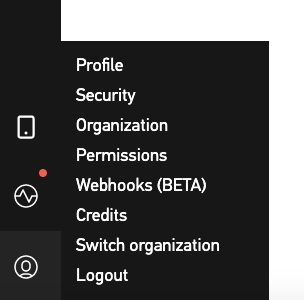 How can I add my webhook to LIGR?
Past your destination webhook URL into the text box on the Webhooks page on LIGR.Live:

How is the data formatted in LIGR webhooks?
We use JSON to encode our webhook data. Read more about JSON here.

Where can I learn more about webhooks?
Here’s a simple guide to webhooks by HubSpot and another guide by Zapier.

How can I set up routines that are triggered by LIGR webhooks if I’m not a coder?
Programmers can build custom applications to work with webhooks, but you don’t need to be a coder to use them. There are many web-based services such as Zapier and IFTTT that make it easy for non-coders to set up routines that are triggered by webhooks. These platforms act as a go-between, pulling in the data from your webhook and allowing you to set up visual routines that can trigger a whole host of actions in other compatible apps such as calendars, accounting software, social networks, and messaging platforms.

NOTE: Webhooks CANNOT be used with matches that are using FREE match credits. An article explaining the LIGR credit structure can be found here.